Intel Corporation, founded in 1968, is an American multinational corporation headquartered in Santa Clara, California. Intel is one of the world’s largest and highest valued semiconductor chip makers, based on revenue.

Intel promotes diversity at the workplace through various employee groups and celebrates various events on campus. The Indian Independence day celebrations at the Intel headquarters is a crowd favorite and draws over 200 people. This year one of the focus areas was the “Influence of Gandhiji on the Indian Independence Struggle”. The Gandhi Research Foundation(GRF) together with Gandhi Initiative at Silicon Valley were the resource people for the event. GRF helped this endeavor by providing invaluable exhibits on historic events and milestones in the Independence struggle. The audience were excited to see the extremely rare pictures on display like Gandhiji with Tagore, various stills from the Salt Satyagraha, Quit India Movement etc. People were also thrilled to know that GRF- the biggest center for Gandhian studies was involved in this effort.

Some pictures from the event are below: 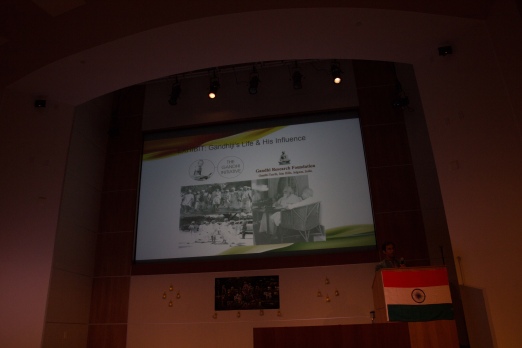